Free English translation on 20 September 2021. The German-language document you may find here!

" Excerpt from the Internet"

"The 120 to 160 nm large virions (virus particles) have a viral envelope in which 3 or 4 different membrane proteins are incorporated: The large, glycosylated S protein (180 to 220 kDa) forms as a trimer with its club-shaped spikes (peplomers) protruding outwards by about 20 nm the characteristic, wreath-shaped appearance of coronaviruses (Latin corona 'wreath, crown'). [3] A second membrane protein E (9 to 12 kDa) is present in smaller quantities and, in addition, the HE protein (haemagglutin esterase protein, 65 kDa) is only present in human coronavirus OC43 and the coronaviruses of group 2 (genus Betacoronavirus). 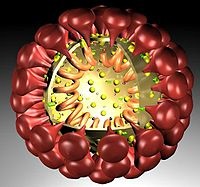 The M protein (23 to 35 kDa), which is also anchored in the envelope, is directed inwards and coats the inside of the viral envelope (matrix protein). Inside is a presumably icosahedral capsid, which in turn contains a helical nucleoprotein complex.

This consists of the nucleoprotein N (50 to 60 kDa), which is complexed with a strand of a single-stranded RNA with positive polarity. Certain outwardly projecting amino acid residues of the N protein interact with the matrix protein M so that the capsid is associated with the membrane interior."

My person, too, was dismayed to learn of the outbreak of the Corona virus epidemic and heard on the news today that it will be another 18 months or so before a drug can be developed and* put on the market.

That is of course quite a long time for such a rapid outbreak of the sometimes life-threatening communicable disease.

However, my person would like to clarify that for this and another homepage the slogan "corona.cum-clavatore.de" was already set as a subdomain last year, namely on 02 March 2019, which is also provable by the system of my customer account and this page has not the slightest thing to do with a tacky pomposity.

However, my person would like to comment on the SARS virus at that time, which also came from China and for that reason my person had written to the Chinese Embassy in Germany or even sent a fax.

The letter was about preventing the spread of the SARS virus and so my person formulated an urgent appeal in this regard.

In addition, my person produced a drawing of the possible virus and either also gave this drawing to the Chinese Embassy or possibly sent it to the Luebeck Health Department.

Presumably, however, the drawing was also sent to the Chinese Embassy, as my person felt confident at the time, for certain reasons, that he could describe the virus.

As far as I can remember, the virus had so-called "satellites", which can change hands and make the virus difficult to stop.

At this point, it should be possible for experts to gain a quick insight into how to combat the virus.

The strange or amazing thing was that my person had never seen a photo or drawing of a virus before and only after years saw such basic pictures of viruses.

It would of course be a great help from ABOVE if my person had now landed a hit with this Corona virus that was actually accurate and that the specialists could do something with.

If that were the case, then word of the event should spread quickly but insidiously.

The professionals would then have done the work, of course, but nevertheless one could then no longer speak of a happy coincidence in the matter.

So I remain in the hope that the specialists will perhaps even find the old drawing and if not, then will also continue to research in this direction mentioned here, in order to "land a hit as quickly as possible!"